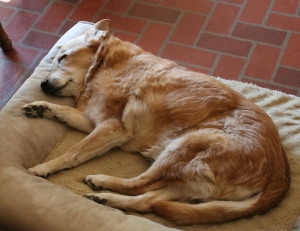 There is no point at which you can say, ‘Well, I’m successful now. I might as well take a nap.’
~ Carrie Fisher

I’ve been offline most of the day and checked in to discover Carrie Fisher has died. It’s hard to comprehend. She seemed indestructible. Tiny and fierce. A forever force of nature.

I remember reading POSTCARDS FROM THE EDGE the first time. I remember thinking that Carrie Fisher was hilarious, yes, but also incredibly insightful about what it means to be human. She was so damned smart and brave. And generous. She went to her dark places and brought that scariness out into the light as a gift to us. Her writing, tweets, and interviews were a constant reminder that none of us is alone on this spinning ball, and that since we’re in this thing together, we might as well share laughter along the way. 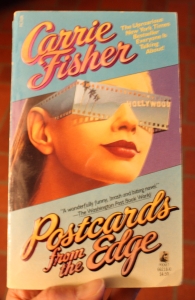 This is the copy Zippy bought for me to replace the one he accidentally dropped in a lake while on vacation.

There’s lots of gold in the book’s “postcards” written by character Suzanne Vale, but this portion from the Epilogue speaks to me now:

[…I still don’t think I feel the way I perceive other people to feel. I don’t know if the problem lies in my perception or my comfort. Either way I come out fighting, wrestling with my nature, as it were. And golly, what a mother of nature it is. Sometimes, though, I’ll be driving, listening to loud music with the day spreading out all over, and I’ll feel something so big and great—a feeling as loud as the music. It’s as though my skin is the only thing that keeps me from going everywhere all at once. …]
Happy New Year,
Suzanne

Carrie Fisher lived a life big and bold, and I’m glad her skin kept her here with us as long as it did. Wherever you are now, Carrie, I hope there’s nonstop loud music and feelings so big and great. You were one helluva writer and human being. Rest in peace.