You can observe a lot by just watching. ~ Yogi Berra 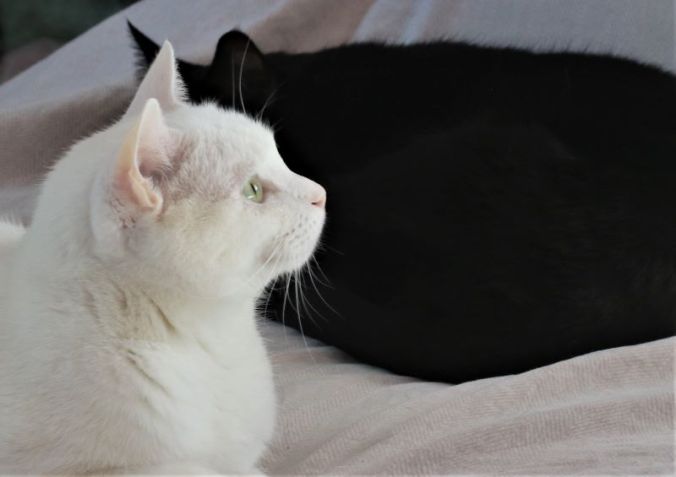 Marcel takes Yogi’s sage insight to heart, watching out the window as his brother Loki naps beside him, oblivious to the birds on the awning.

Tomorrow is our neighbor’s birthday and because B is the kind soul who cares for Loki and Marcel when we’re out camping, I wanted a photo of them for a card. It’s tough getting good photos of a black and a white cat (at the same time) because Loki tends to fade into the shadows. After several unsuccessful photo shoots of them napping on the bed and lounging in their box-condo, I asked Zippy to hold them.

It was a full minute of squirming, shedding, feline shenanigans, but I was able to capture this shot. I’m especially pleased Marcel’s looking directly at the camera because B has high hopes that one of these times when she’s cat-sitting, she’ll finally get Marcel to happy-drool. He’s been holding out on her.

This is Sunday, and the question arises, what’ll I start tomorrow?  ~ Kurt Vonnegut

One day last week, son Wildebeest and I had our cameras out to practice photographing a black cat and a white cat at the same time. It’s difficult to land on the correct settings that will allow the black cat to have definition without also blowing out the white cat’s fur. This photo is proof of my ongoing struggle.

Marcel and Loki basking on their box condo. November 20, 2020

However, capturing the moment Loki launched the attack on his brother from below was a small victory. And if you look closely, you’ll see a hint of trepidation on Marcel’s face. Every picture, even a poor one, tells a story.

As anyone who has ever been around a cat for any length of time well knows, cats have enormous patience with the limitations of the human kind.  ~ Cleveland Amory

And we’re really stretching their feline patience these days. Come on, human kind. We’ve got to do much, much better.

This photo was taken years ago and when I came across it today, I was underwhelmed. I mean, why the long shot of the rail and the barely-visible cat tails? I was about to delete when I looked more closely. 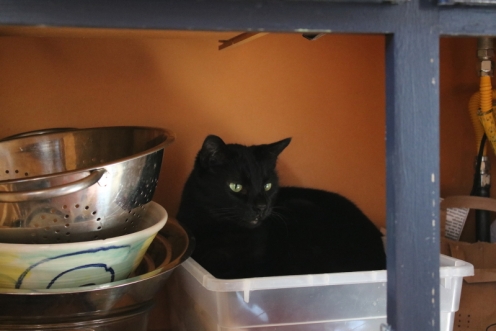 I feel those feelings, Loki.

How’s about you and I find a patch of sunshine and settle in for a nap?

Here’s Loki more than a year ago, basking in sun so bright his pupils are slits. None of that toasty warmth today. It’s gray. Cold. Drizzling and threatening snow. Soul-crushing, if I’d allow it. BUT. I’m parked at my standing desk, drafting my new novel.

Maybe if it was sunny and warm, I’d be curled in a patch of sunshine. Napping instead of writing. Guess that’s my silver lining on this miserable day. Color me grudgingly grateful.

A black cat crossing your path signifies that the animal is going somewhere.
~ Groucho Marx

(As an aside, it’s the one-year anniversary of Loki’s big dental procedure in which he lost almost all of his teeth. Despite his expression here (pre-procedure), he’s one of the gentlest souls on the planet and I’m grateful for his good-luck companionship.)

Marcel climbs on top of the scratching post to avoid his brother who wants to beat him up, then briefly stares down at Loki before smacking him on the head. 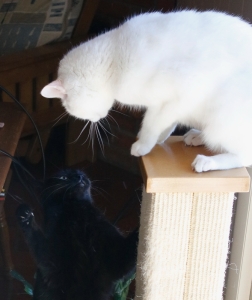 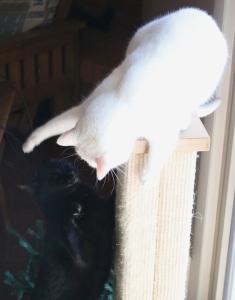 Loki then tries to storm the castle by clawing his way up the scratching post. Marcel looks on with calm detachment as Loki eventually loses his grip and falls back to the floor where he stares in frustration at his brother. So close and yet so far, Loki. 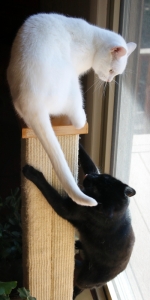 Just as quickly as the kerfluffle began, it was over. Both cats are now napping and all is well this Caturday.

Black cat Loki and white brother-cat Marcel striking the same pose on my bed this morning.

If you look very closely you can see Loki’s green eyes. Otherwise, he’s pretty much a black hole. Explains why there aren’t many photos of him on this blog. Loving? Absolutely. Photogenic? Not at all.

Soon after adopting feline brothers Marcel and Loki in October of 2013, son Zebu vowed to buy me a baby sling to carry our loving, snuggly cats. Despite my frequent reminders of his promise to me, years went by with no sling. And then this past Mother’s Day, Zebu surprised me. It’s safe to say he also surprised Marcel.

This photo was taken in May during Marcel’s initial and longest stint in the sling. But you can tell by his ears that he’s less than thrilled with the situation. I tried putting his brother in it last night and he wasn’t having it. At all. And then Marcel humored me for all of fifteen seconds before escaping.

Maybe they’ve figured out it’s technically a sling for small dogs and are philosophically opposed to debasing their royal cat selves.

Or maybe they just really, really don’t want me carrying them around like babies.

Elder son Wildebeest came home for a visit last week along with a friend’s dog. When Wildebeest initially asked if Little Miss could come, I worried about her chasing the cats. But because my son and the doggo adore each other and because Little Miss’s human went on vacation without her, I told Wildebeest to bring her. I’d protect the cats as best I could.

Well, Little Miss is a very small dog. She’s essentially a furry football. Plus, she’s ten years old and more interested in snuggling and naps than chasing anyone. Instead it was Loki, my shy cat who’s afraid of birds and

studies insects from a respectful distance, who was the aggressor. We tried hard to keep the peace between them, but multiple times over the past week Loki cornered and then chased her. Each time after it happened, Little Miss quivered in fear. Last night, Loki snuck up to where Little Miss was snuggled in Wildebeest’s lap and smacked her hard with his paw. I heard the frightened yelp from the basement. By that point, all the humans in the house were fed up with Loki’s bullying behavior. We were on #TeamLittleMiss and wondering what in the hell was wrong with the cat.

Well, Wildebeest and Little Miss headed home this morning and an hour or so after they’d left, Loki sat outside my writing room door and cried. I let him in and draped him over my shoulder. He immediately rubbed his head against my cheek and purred. And purred. And purred. As I held him, my frustration evaporated. I hadn’t consulted him before inviting a strange dog into our home and I have no idea what transpired in his life before we adopted him. Maybe he’d once been terrorized by a furry football. In any case, our reconciliation lasted about ten minutes and then Loki wanted to get down. I let him out of my writing room and got back to work. I’m guessing my handsome and loving kitty went to take another nap.

and here’s Marcel being chill while soaking up a little sun:

Neither phone-photo is especially high quality, but these feline brothers are most definitely top-notch.

Loki’s not amused
found a quiet napping spot
then paparazzi

This could’ve been a truly awesome photo. Imagine a large white cat stretched out on the backside of the hanging shirts, staring through the multi-colored plastic hangers with yellow-green eyes. Imagine a self-satisfied expression on that white cat’s face as you struggled to understand how he got there. Imagine being frozen in place as he stared you down. 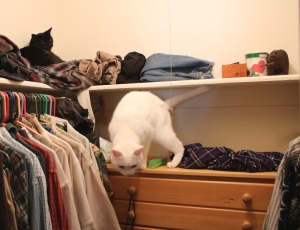 By the time I snapped out of my Marcel-induced reverie and returned with my camera, this was all I got. In fact, this subpar photo was staged. Marcel had already extricated himself from the hangers and jumped down before I could get a shot so Zippy picked him up and put him back on the dresser. (Confession: I was hoping he’d jam Marcel back through the hangers, but apparently my mate and I have different cat-wrangling sensibilities.)

Loki, true to form, remained chill throughout the activities.

A couple weeks ago a visiting friend (who’d recently suffered a head injury) asked if we had two black cats after seeing one in our backyard. After checking to make sure our indoor-only Loki was still inside, I assured the friend we had only one black cat. And, I thought to myself, “You’re seeing things, my friend.”

Last night I discovered he was right and I was wrong.

I’d just gone to bed when I realized I’d forgotten to close the black-out shade behind the curtain. I pushed back the curtain to do so and saw a dark shape against the window. I almost wet myself. Then the dark shape was gone and I thought maybe I was seeing things. But Zippy turned on the outside lights and there under the evergreen shrubs was a black cat with green eyes. The spitting image of Loki.

I owe Kaden an apology.

I took a total of two photos today. First, I crept up on wild and crazy Marcel. SNAP!

Then, I pivoted to capture the rambunctious Loki.

National Geographic, you know where to find me.

Exactly one year and one day ago Emma came to stay. Not a whole lot has changed since then, except that we still haven’t mastered not-blurry photos of her AND elder-dog Zoey now has one more “damn millennial” to shake her head at AND cat-brothers Loki and Marcel have mostly put aside their differences to join forces against the high-energy pupster AND strangers now stop Zippy and me on the street to inform us that Emma is so very cute.

As if we hadn’t noticed.