I’m afraid of heights and frequently have dreams in which I’m waaay too far from the ground. My fear is a known quantity in my household. So when I announced before leaving for Crested Butte a couple weeks ago that I was going to ride the ski-lift, Zebu’s response was a skeptical/worried “Really?”

Then I arrived and watched the lift from our rental balcony. My heart picked up the pace and my chest got tight. Zippy suggested we check it out and then I could decide, assuring me it was okay to back out. We walked to the lift-line filled with people in helmets, body armor, and mountain bikes. Turns out Wednesday evenings allow unlimited lifts up the mountain for bikers wanting to ride the trails to the bottom. I was in line next to little girls not only brave enough to ride the chair lift but to bomb down the mountain on bikes! Those two young sisters listened politely as their dad reassured this grown-ass woman I’d be fine on the lift. 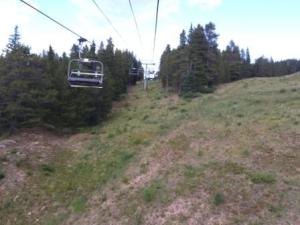 On the ride down the mountain (which was much easier and more relaxing for me, to the extent I released my death grips on the lap bar and Zippy’s shirt), we passed the biker girls and their dad riding up the mountain again. We all waved and one of the girls shouted, “Enjoy your ride!” 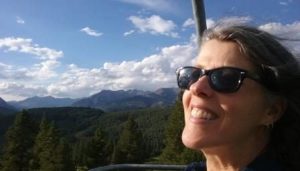 Thanks in no small part to their example. Girl power!