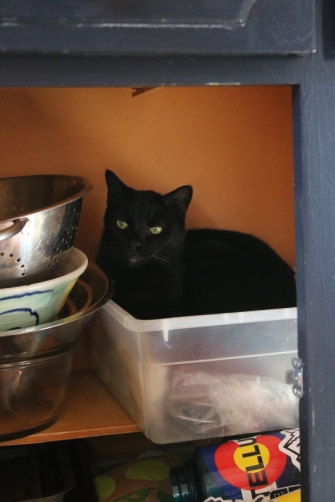 GET FUZZY by Darby Conley

Today I’m grateful to Bucky Katt for lowering the bar. This first draft of my middle grade novel is at least a couple rungs above a list of the stuff I’ve eaten today.

That’s not to say I want anyone reading what I’ve written so far . . .

Today my son Zebu and I washed all our windows, inside and out. As we traveled room to room, Marcel the cat followed us. At one point he got up on the sill next to a newly-gleaming window and proceeded to sneeze. On the glass. 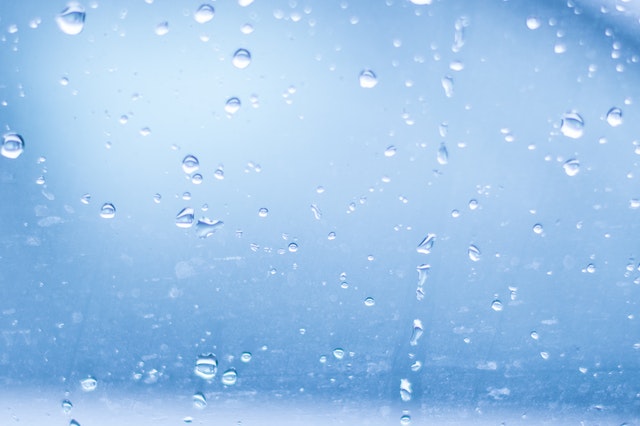 I’ll admit, it wasn’t quite as bad as this Pexels photo. Marcel didn’t shower the entire window with his snot. Instead, it was contained to a rather orderly row along the lower portion of the window. Zebu and I were mildly annoyed, but laughed about our silly feline friend as we recleaned the window. Then Marcel followed us to the next room and sneeezed on another window. Zebu and I were less amused.

And when Marcel sneezed on the third window Zebu stated the obvious: “This is feeling deliberate.”

No one in the family gets away with just one name. The furry ones in particular are addressed by an assortment of monikers. Our elder dog, Zoey, is also known as the Orange Roughy, Speed Bump, Zoey Pigza, and the Pig.

Our younger dog came to the family with the name Emma and quickly became Emma Jean, then Emma Jean-Jean, and frequently just Jean.

In fact, I often greet my smiling friend with “Hi, Jean.” Then I pause. “Or should I say, Oral.” 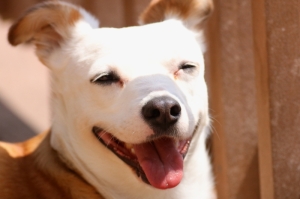 After I finished my hoop-dancing session this morning, Zippy walked into the kitchen. I’d blasted lots of funky songs from my playlist and the final one was “Overpowered by Funk” by The Clash. As I danced over to pour myself coffee, I asked my mate, “Are you feeling overpowered by funk?”

“No,” I cried. “That’s just wrong! How could anyone be immune to funk?! That’s blasphemy!”

“Well,” Zippy conceded. “I do like Roger Clinton more than most people.” 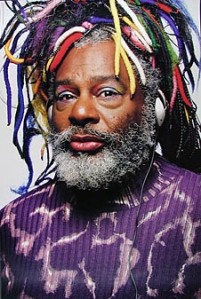 No offense to Zippy, but there’s no mistaking Roger’s music for George’s.

Today’s revision work felt a bit like mucking around in the pipes. It was worth the somewhat grimy effort, though, because all plot and subplot lines are now in synch and flowing quite nicely. Hallelujah!

Now if only I could pee standing up.

Who among us hasn’t wanted to pull
a banana on someone/something?

Guaranteed cure-all:
watching Loki fly on by.
Bet you can’t not smile. 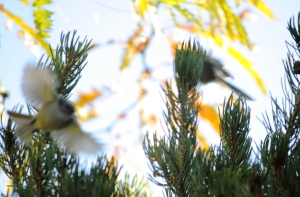 The DMV is
filled with long lines and long waits.
Bonus: human tricks! 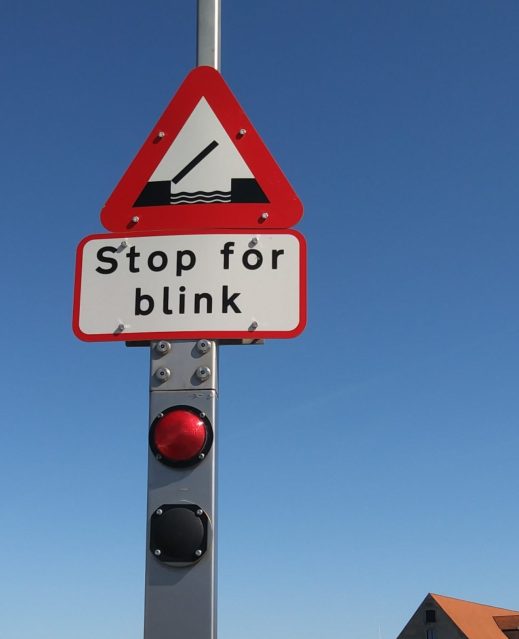 Unless, of course, you’re one of those overachievers who can walk and chew gum at the same time. 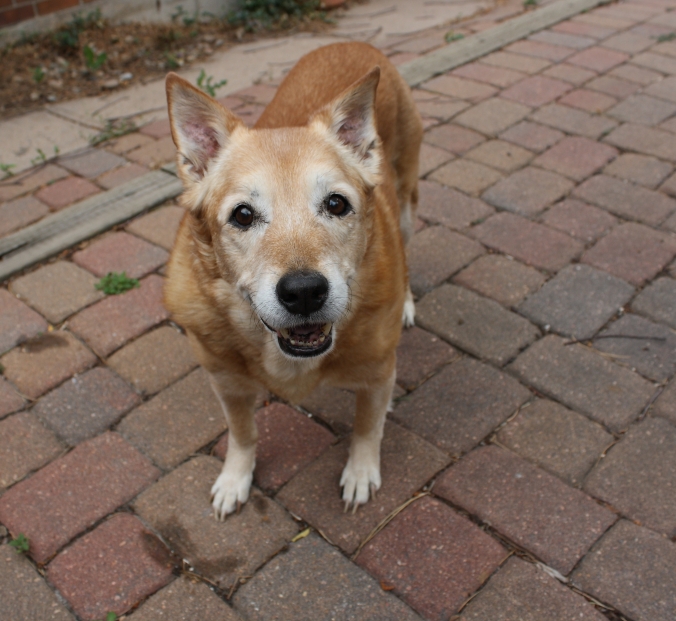 The best way to cheer yourself up is to try to cheer somebody else up.
~ Mark Twain 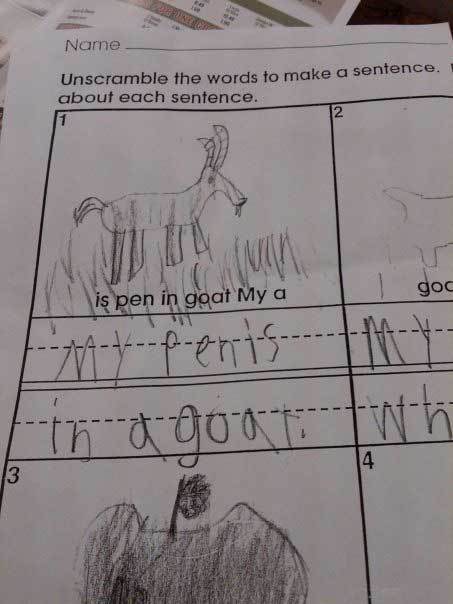 From “The Top 40 Most Hilariously Wrong Exam Answers”

Curiosity killed the cat, but for a while I was a suspect.
~  Steven Wright 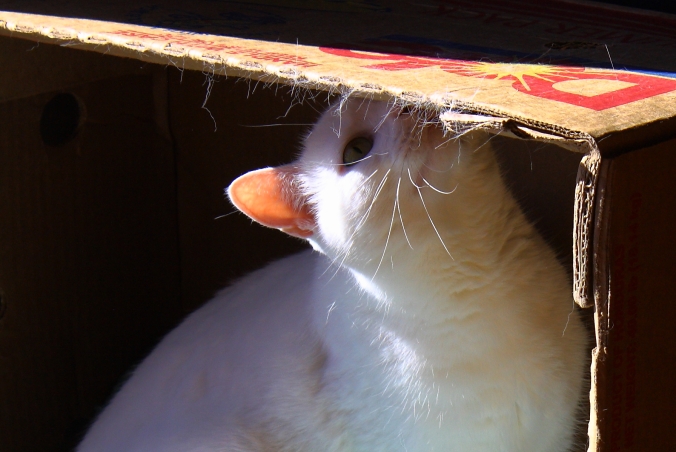 I’ve started working again on a project that I put on hold in 2012 because I didn’t feel equipped to do it justice. I’m still not insanely confident about my abilities (after all, I am a writer), but I’m pushing ahead.

Last night my Writing Roosters critique group got together, and one of the members spoke of her current process as she drafts another book in a series. She said that for her, outlining and research could turn into a form of procrastination, and that it was important to just get writing and trust that that other stuff will sort itself out along the way. I realize that isn’t a new concept, but it was one of those right-comments-at-the-right time things, and it went ping in my brain.

That’s exactly where I’ve been with this project; reacquainting myself with the characters and plot, doing more and more research. Thinking I had to get most every detail nailed down. Obviously, that’s false. Because as it says in STOP THAT BALL! : Could this go on all day and night? It could, you know, and it just might.

One of the best read-alouds EVER!

So today I stepped away from the outlining and research rabbit holes, and started writing. I didn’t get a whole lot of words down, but I accomplished more than page numbers.

Marched this morning with a couple hundred thousand other people. The day started out cold and overcast (really appreciated the ride downtown on the packed-to-the-gills light rail because all that body heat warmed me up again) before turning sunny and warmer. It was a good morning, and I’m glad my neighbor friend, Kim, invited me to march with her. I brought my camera and captured some of the wit and wisdom of the very large gathering. (Click to enlarge) 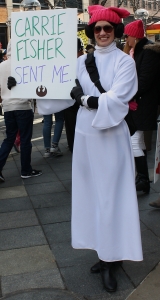 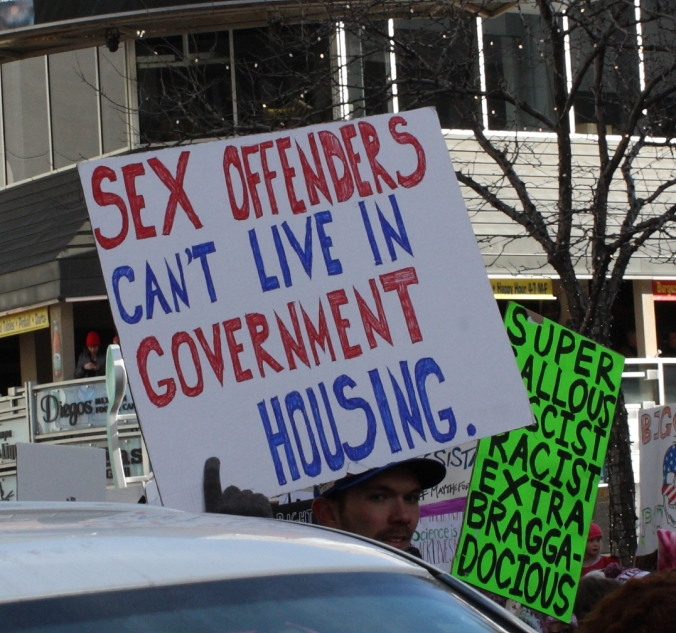 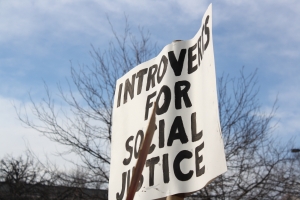 In case you missed it the first time. 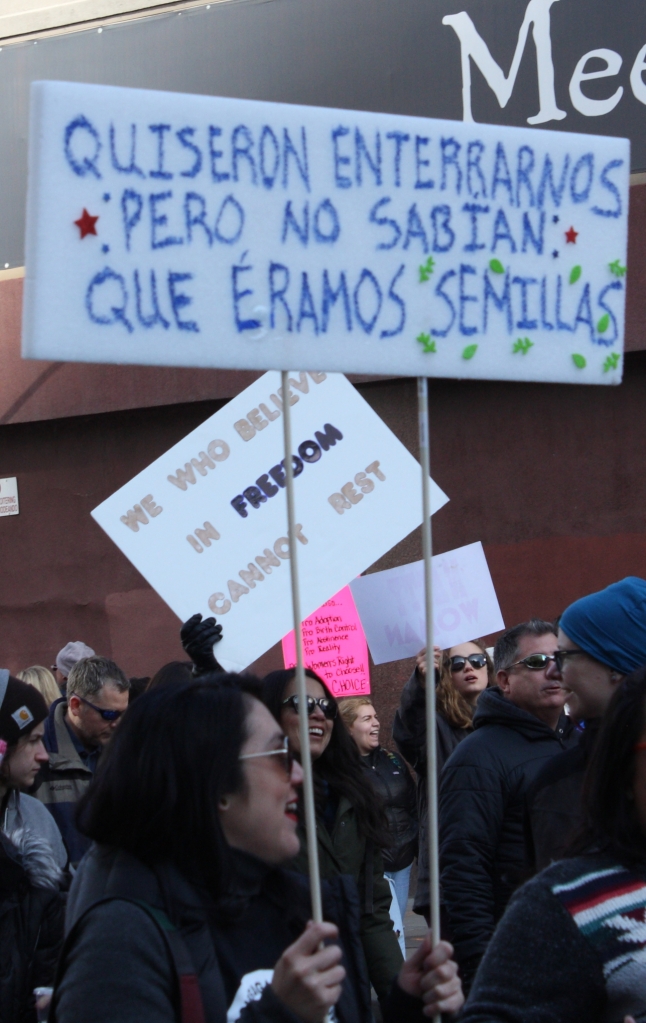 “They tried to bury us. They did not know that we were seeds.” (h/t and thanks to Jenn Hubbard for translation) 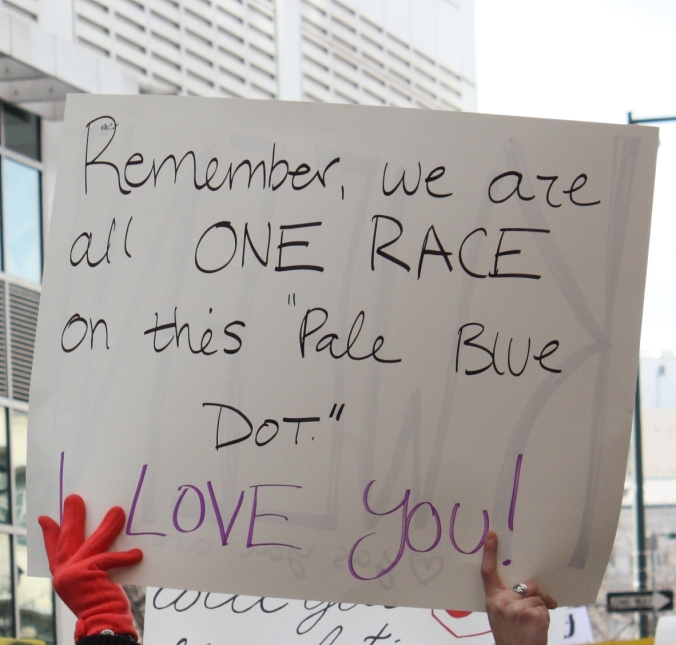 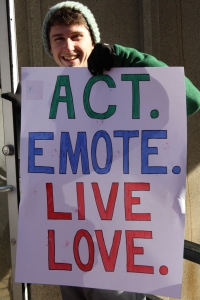 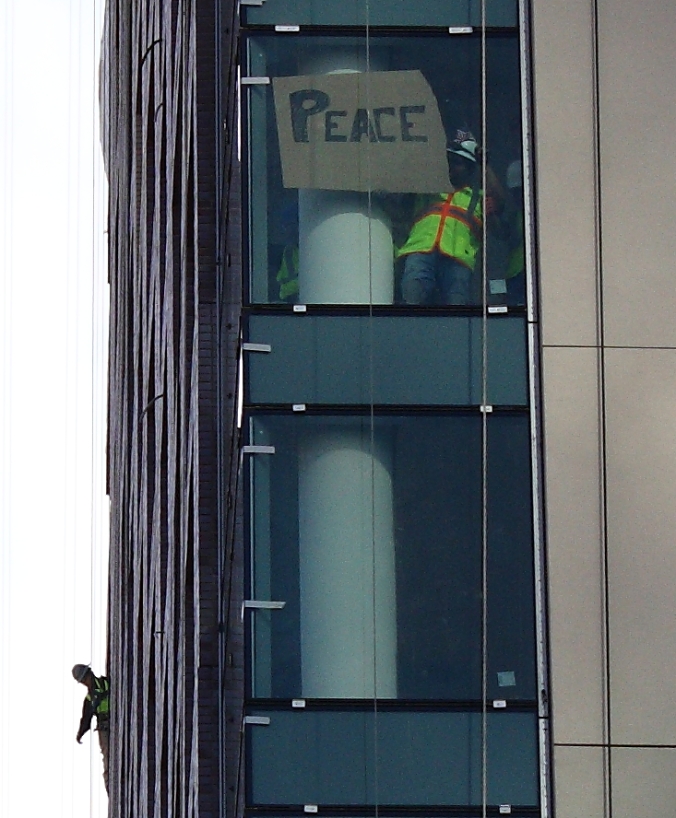 Construction workers above the march. 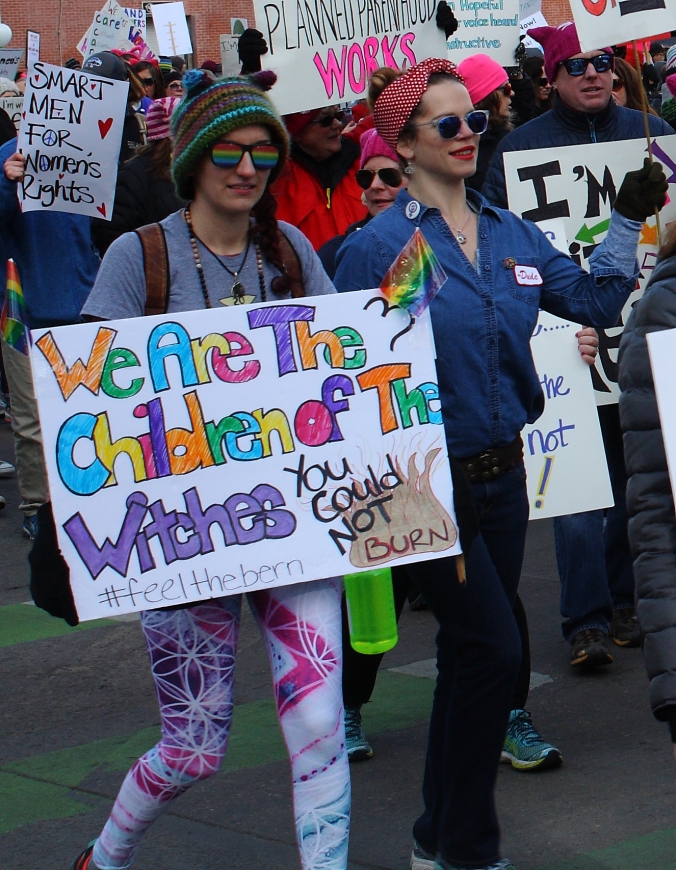 Kim and I left the march before it reached the park so you won’t be able to find us in this crowd. Turning around was a good call, though, because as we “swam” downstream, we got a good look at THE MANY MANY PEOPLE. It was life-affirming to read the signs screaming with anger, hope, and humor.

We’re gonna need all three to make it out alive.

Marcel up top, watching me closely while Loki, down below, does his best impression of a narcoleptic. A much better photographer than me would be able to balance the harsh sunlight with the white fur and black fur. Makes me long for the days in the darkroom when I could dodge and burn the image. But because I should be working on my writing project rather than messing with this, I’ll let it go.

Apologies for the glare. (HA! I made a pun.)

This morning I took my exercise and yoga routine to the basement in order to escape the cacophonous roofers. As I did a quad stretch next to the support post, something caught my eye:

AE?
My first thought was that those initials were etched by Alex E., one of Zebu’s best friends throughout childhood. But then it hit me: Amelia Earhart!

Because look what else I found just inches from those inititals:

That’s clearly either a flight route or maybe even a rough sketch of Howland Island where Amelia was headed on that fateful flight. Do you know what this means? I’ve uncovered a clue that could help solve the mystery of Amelia Earhart’s disappearance!

Wow! Who knew what was in store when I woke up this morning?!

(Okay, okay. Cut me some slack. I’m suffering the effects of WAY too much loud noise. The hammers are echoing in my head.) 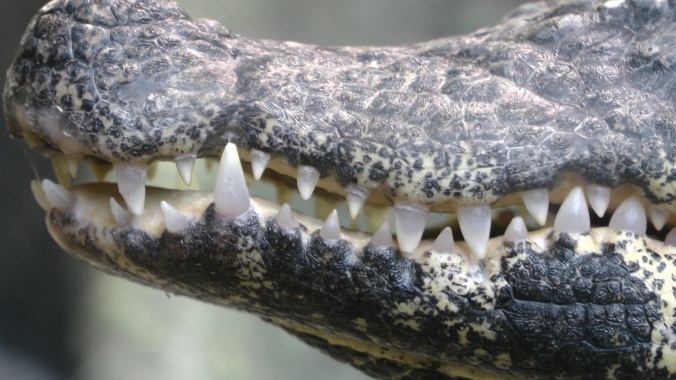 Happiness is your dentist telling you it won’t hurt
and then having him catch his hand in the drill.
~  Johnny Carson

GET FUZZY by Darby Conley

This old Get Fuzzy strip does not represent any personal animosity toward poets.
Rather, it’s more a statement on my current state of mind.
Specifically, my desire to punch something.
Although, stabbing would be equally therapeutic.

As Zebu would say, “Mom’s feeling a little stabby today.”

“Stabby and punchy.”
That’s me.

Shouldn’t there be a t-shirt or bumpersticker?

For much of yesterday and today, it’s felt as if a railroad spike had been driven into my left eye. 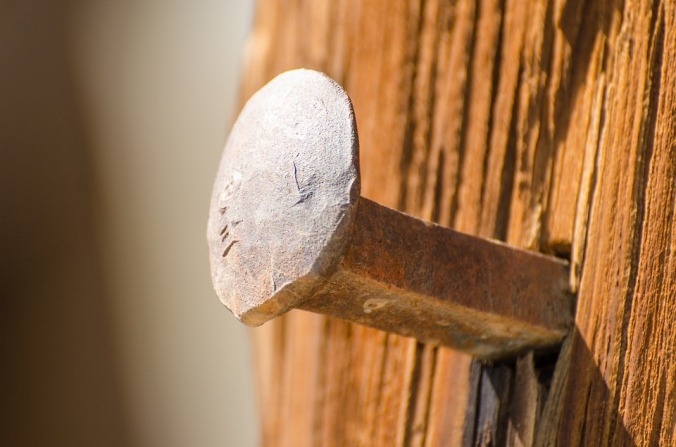 I’m tired and nauseated and sick of just about everything right now, and thought I’d post a quick spike image that might convey those feelings. But then I came across this quotation:

The other day I was thinking – because I get a lot of headaches – I was wondering whether the head should be where it is. Because, at the end of the day, it’s probably the heaviest part of your body, right? And yet it’s at the top as opposed to, I don’t know, dangling at the bottom somewhere.    ~  Karl Pilkington

Thanks, Karl!
P.S. I thoroughly enjoyed THE WORLD ACCORDING TO KARL PILKINGTON

Zippy and I just returned from a family picnic at a park that had a playground. I spent time on a teeter-totter with three nieces, two of us per end.

(This teeter-totter from a long-ago Minneapolis park is MUCH higher than ours today.)

The rule was, whoever was up in the air had to tell a joke in order to be lowered to the ground. Here’s a sampling:

What do you call a pile of cats?
A meowntain.

What do you call an alligator in a vest?
An investigator.

I rarely attempt telling a joke because I inevitably screw up either the set-up or the punchline. Case in point: I messed up the Orange Knock-Knock Joke today.
I kid you not. But none of them called me out on it and they still lowered me to the ground.

Allow me to explain.

It’s February and I’m longing for spring when flowers bloom.
So I went to last year’s photos and found this clematis:

“Perfect,” I thought. “I’ll post it as Thankful Thursday: The Looking Forward Edition.”

But then I wanted to also include a quotation about the future,
so I searched for something eloquent to match my lovely flower.
And I came up with this:

“The future will be better tomorrow.”  ~ Dan Quayle

A keeper, for sure, because not only am I longing for spring, I’m in desperate need of
laughter. But I won’t say anything more about that because as a man once said: