I want this shirt. 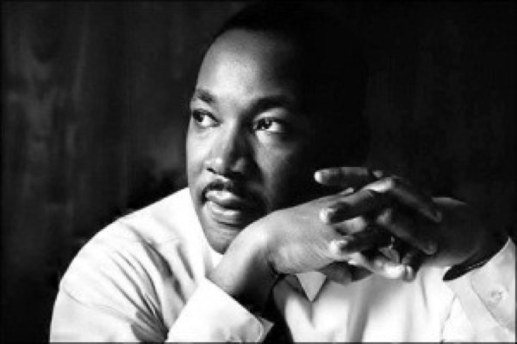 We must rapidly begin the shift from a ‘thing-oriented’ society to a ‘person-oriented’ society. When machines and computers, profit motives and property rights are considered more important than people, the giant triplets of racism, materialism, and militarism are incapable of being conquered.
~ Dr. Martin Luther King Jr. (excerpt from his “Beyond Vietnam” address on April 4th, 1967, a year to the day before he was assassinated in Memphis)

Now’s the time to start operating that heavy machinery.

We need radical change and there’s no time to waste.
Tear it all down.

“We must recognize that we can’t solve our problem now until there is a radical redistribution of economic and political power… this means a revolution of values and other things. We must see now that the evils of racism, economic exploitation and militarism are all tied together… you can’t really get rid of one without getting rid of the others… the whole structure of American life must be changed. America is a hypocritical nation and [we] must put [our] own house in order.”
~ Martin Luther King Jr. (1929-1968), Report to SCLC Staff, May 1967.

(Go here for other quotes from  MLK, eloquent dissident.)

This morning I did my twice-monthly volunteer stint with the Denver VOICE. As the non-profit’s Twitter bio states: “The Denver VOICE is a monthly newspaper that provides entrepreneurial opportunities to people who are homeless or impoverished.” It’s a wonderful organization that can help people earn enough money to get off the streets.

During today’s session at the distribution desk (where I sold papers for 50 cents to the vendors who will vend them for a suggested $2 each), I shared many smiles and laughs. It was a good morning. And then, near closing time, one more vendor came in the office. It was a man who struggles with mental health issues, and today was particularly difficult for him. He became agitated and then emotional. It was heartbreaking to witness someone in such a vulnerable condition.

As I drove home, I cried. For the umpteenth time I thought, “Life is a hard row to hoe.” But then I remembered the GOP greedheads who are rushing through tax legislation that will decimate the safety net that’s supposed to support the nation’s most vulnerable, and my anguish turned to outrage.

How dare they turn their backs on people struggling to keep their heads above water?How dare those politicians enrich themselves and the already uber-wealthy at the expense of the rest of us? And, perhaps most importantly, why aren’t we taking to the streets with torches and pitchforks?

and goats that recognize revolution’s a-comin’ and they’d best get out of the way or risk getting mowed down by angry mobs. 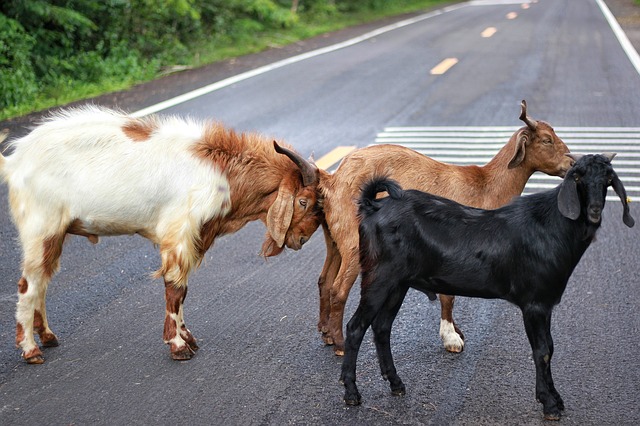 Thank goodness I still have access to a free internet and all its goat images. 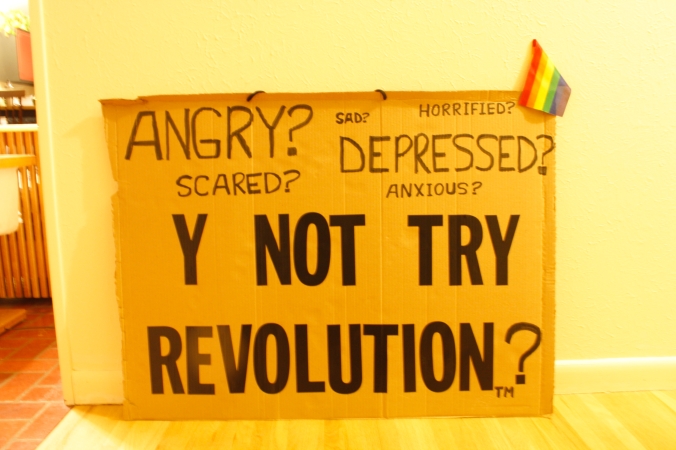 This morning I joined my friend, Sarah, at an event put on by Warm Cookies of the Revolution. Warm Cookies bills itself as a Civic Health Club, and while Sarah has participated in numerous events, today was my first.

The topic: The Science of Effective Resistance by Erica Chenoweth

This was the opening slide: Presentation prepared for Warm Cookies of the Revolution: The Science of Effective Resistance Erica Chenoweth Ph.D

When Sarah texted me the invite I went to the site to read up on the talk, and saw that it was about nonviolent conflict. My first thought was, “Screw that. We need to be in the streets with torches and pitchforks, and maybe burn a few cars while we’re at it.” (Yes, I am incredibly frustrated with the timid response from the “opposition” party.) But I value Sarah’s judgment and wanted to spend time with her today, so I thanked her for the invitation. And off we went.

Here’s my takeaway: Erica Chenoweth has done the numbers on violent vs nonviolent campaigns of resistance. And guess what? Nonviolent campaigns have a higher success rate. There are a variety of reasons for that but the one that went ping in my head was that acts of violence can (and probably will) turn off active allies and potential allies. Imagine that!

Her research shows that all successful nonviolent campaigns have three things in common:

Hey, looky there! We’ve got two out of three going on right this very moment!

“Capitalism does not permit an even flow of economic resources.
With this system, a small privileged few are rich beyond conscience,
and almost all others are doomed to be poor at some level.
That’s the way the system works.
And since we know that the system will not change the rules,
we are going to have to change the system.”
~ Martin Luther King, Jr.

Update 1.17.17: Silly me, I thought my intent was clear yesterday, but neither Zippy nor Zebu understood that I meant this post in a positive way (both for MLK and Bernie Sanders), as in “Look! It’s a man of color speaking about economic inequality, despite the prevailing ‘liberal’ wisdom that only ‘one-note Bernie’ and his young white male supporters believe this issue is of utmost importance.”

Intelligence without ambition is a bird without wings.
~  Salvador Dali

For a successful revolution it is not enough that there is discontent.
What is required is a profound and thorough conviction of the justice,
necessity and importance of political and social rights.
~  B. R. Ambedkar

I salute the people of Egypt.

Your courage is inspirational
and your resolve is awe-inspiring. 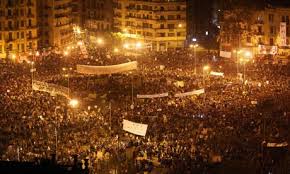 I read this in my paper today, and want to put it out there:

Published on Truthout (http://www.truth-out.org)
David Sirota | With Democracy or Against It – There’s No In Between

In America, politicians are rarely compelled to turn rhetoric into action. Presidents make public commitments to support legislation while quietly instructing their congressional allies to kill the corresponding bills. Congresspeople then campaign on policy proposals only to make sure their respective presidents veto the initiatives.

We all know this game — we know its rigged rules ensure plausible deniability and prevent follow through. But as the Mideast showed this week, just because those are our rules doesn’t mean everyone plays by them.

That’s what the Egyptian protests against U.S.-backed dictator Hosni Mubarak really represent for us: a poignant demand that we actually embody our democratic creed — a demand whose response shows an American government desperate to avoid walking its talk.

Remember, President Obama told a Cairo audience in 2009 that America would unequivocally back Egyptians’ democratic aspirations. Citing our nation’s history being "born out of revolution against an empire," he said: "We will support (democracy) everywhere."

That declaration, while admirable, was hardly courageous because it was presented as a foreign-policy version of an American campaign promise — that is, it was issued by a politician who never really expected to be asked for attendant action. In fact, the Obama administration was so certain it wouldn’t have to embody its platitudes that it was actively slashing grants for democracy-building in Egypt while maintaining military aid to the Mubarak dictatorship.

As if deliberately bragging about this disconnect between pro-democratic rhetoric and undemocratic reality, Secretary of State Hillary Clinton told Arab television: "I really consider President and Mrs. Mubarak to be friends of my family."

Those "friends," of course, fired "USA"-labeled tear gas canisters at the very democratic protestors America promised to support. As the demonstrations persisted, Obama discarded the bromides of his Cairo speech and refused to press for Mubarak’s immediate resignation. He then dispatched Vice President Joe Biden to both praise the despot as an "ally" and tell reporters to "not refer to him as a dictator."

Following suit, Clinton said that despite America’s stated commitment to democracy, "we’re not advocating any specific outcome." When asked whether the administration was at least backing away from her BFF Mubarak, Clinton was reduced to Rumsfeldian incoherence, insisting that "we do not want to send any message about backing forward or backing back."

This left Egypt’s Nobel Prize winner Mohamed ElBaradei to humiliate our equivocating leaders by stating the obvious: "The American government cannot ask the Egyptian people to believe that a dictator who has been in power for 30 years will be the one to implement democracy.".

Despite the indisputable truth of ElBaradei’s words, politicians and pundits has mostly defended the administration’s behavior. From neoconservatives to Obama loyalists, the mediascape teems with those arguing that though we want democracy, we might have to continue propping up autocrats because democracy could elect regimes we dislike.

But that’s the rub: Just as you cannot be sorta pregnant, you cannot kinda support democracy, and only when it does what you want. That’s not "supporting democracy"; that’s imperialism. Indeed, the ideal of self-governance is as uncompromising as America’s views on terrorism: You’re either with democracy, or you’re against it — and as Martin Luther King noted, we are too often against it.

Echoing President Kennedy’s aphorism that "those who make peaceful revolution impossible make violent revolution inevitable," King warned in 1967 that while our country once "initiated so much of the revolutionary spirit of the modern world," we were becoming "the arch anti-revolutionaries." That reality has sowed predictable anti-Americanism among populations we’ve helped subjugate.

Now, though, we may see some much-needed change. With Cairo protestors so blatantly exposing our hypocrisy, we could end up shamed into finally living our democratic values — and fulfilling Dr. King’s dream.

David Sirota is a best-selling author whose upcoming book "Back to Our Future" will be released in March of 2011. He hosts the morning show on AM760 in Colorado. E-mail him at ds@davidsirota.com, follow him on Twitter @davidsirota or visit his website at http://www.davidsirota.com.

When dictatorship is a fact, revolution becomes a right.
~ Victor Hugo

This is truly amazing,
and I wanted to make sure people know about it.

You can watch the protests in Egypt via Al Jazeera English.
Also, if you’re on Twitter the best hashtag to follow is #jan25.

Prayer versus water cannons via this twitpic link (I wish I could credit photo but cannot find name):

Change is coming, all right.