I decided to bless this Monday with a wee Pygmy Nuthatch and went in search of a quote to accompany my photo. Alas, brainyquote.com interpreted my “nuthatch” request as a search for Margaret Thatcher quotes. NOOOOOOOOO!

I remember gagging when the valedictorian in Zebu’s high school class (a young man I like very much), referenced Thatcher in a positive light in his graduation day speech. And more recently, I could barely watch season four of THE CROWN because it included the Iron Lady, a politician whose every mention makes me feel stabby. Gillian Anderson did an amazing job portraying that horrible woman and the heartless policies she championed, but my entire body felt like a mass of raw nerves whenever she was on screen. (Okay, I can’t resist giving a sample of Thatcher’s philosophy: “A world without nuclear weapons would be less stable and more dangerous for all of us.”) Spoken like a true colonizer, Maggie.

Anyway, getting back to the original intent. Here’s a sweet little bird that recently visited our yard: 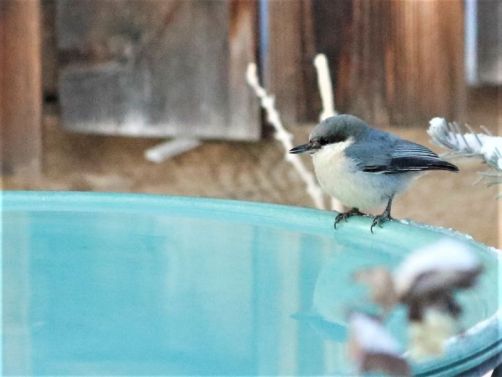 Happy Monday to all. Stay well and I wish everyone a good week.

My son Zebu had all four wisdom teeth removed yesterday, so I’ve been on ice pack and medication duty. Every 20 minutes, he applies two bags of frozen peas to his chipmunk cheeks. The peas are held in a sling we made using the leg from an old pair of my flannel pajama bottoms which is then tied around his head. After 20 minutes of ice, he goes another 20 minutes without. Ice on, ice off. I’m the timekeeper which means it’s easier to stay close.

So how are we spending our time? Watching the Great British Baking Show, of course.

Actually, I’ve never watched the program before even though all sorts of folks on Twitter rave about it. A show about baking? Who cares? I’m the woman who can’t get cakes out of pans in one piece and so spackle with tons of frosting to hold them together. I enjoy eating baked goods, but couldn’t care less how they come about.

Well, I stand corrected. It’s a very interesting and entertaining show. In fact, I haven’t really accomplished much of anything today besides watching those brave people create amazingly beautiful baked goods (along with some Tracy-worthy disasters). Zebu is napping now, but I’m confident later on we’ll tune back in to see how the remaining bakers fare.

The one downside to the Great British Baking Show? It makes me very, very hungry.

So the final season of Game of Thrones starts tonight. My mate and my son just finished watching a recap in preparation for the first episode. Their excitement is palpable.

As for me? I’ve watched a total of maybe a couple hours over the years. Game of Thrones is not my cup o’ violence. However, if I happen to be walking through the room when Peter Dinklage’s character is onscreen I always stop to watch.

Confession: I don’t even know his character’s name. And that’s okay by me.

Last night, Zippy and I watched the final episode of the four-season series “Rectify.” (Logline: A former death row inmate named Daniel Holden, who may have been wrongly convicted as a teen, comes home after nearly 20 years away.)

Zippy and I discovered the show on Netflix last year and were blown away by the first three seasons. At the time, the fourth was still in production and then it eventually became available. For months, I put off watching it because I knew that the story and characters deserved my absolute emotional attention. The show is quietly, beautifully, stunningly intense. There isn’t an empty calorie in those 30 episodes. Each episode must be savored and slowly digested, and I needed to be ready.

Today, I’m digesting. I’m thinking about all those characters and their stories. I’m ruminating on the complexities of justice and the legal system, and the horrors faced by people in prison and the dificulties ex-cons face once they get out. I’m missing Daniel’s sister, Amantha, and wishing we could be friends.

I can’t stop thinking about “Rectify.”

It’s the real deal. The writing is magnificent (and taught me much about storytelling and the power of character arcs), and the performances are extraordinary. Many scenes had me laughing and crying, and always, always thinking and feeling. The show is so damned good and creator Ray McKinnon deserves to have a star or tree or satellite dish named after him.

I’ll stop here. Please, if you haven’t yet seen it, make time in your life for “Rectify.”

I don’t watch much network television so usually avoid commercials. But because I’m all about March Madness, I am now, unfortunately, also all about commercials.

Which is how I know that there’s a pharmaceutical targeted at those with opioid-induced constipation.

Granted, it’s a tough sell. Still, I have to believe Don would’ve found a way to inject some magic into the ad campaign.

Today is the first day of March Madness which means basketball ALL DAY LONG. And I confess that I’ll watch these games ALL DAY LONG. However, I got up and got some stuff done before the tournament started. I did maintenance on my two worm bins (mite infestation YUCK) and worked on my writing project. But since then I’ve been parked in front of the television, switching between games (where there have already been two nail-biters, yo). In my defense, I am multi-tasking. 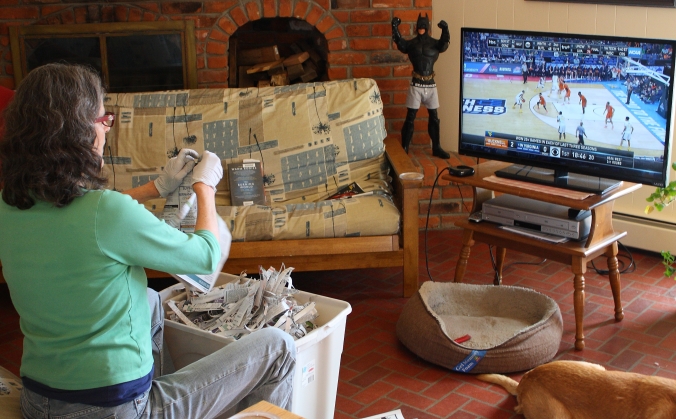 Here I am shredding newspaper for the worm bins. Not only does it relieve some guilt regarding the time I devote to watching men’s college basketball, it turns out that ripping paper into strips is a good way to let off steam when the team I’m rooting for is behind.

Today we pulled the plug on our telephone land line (I know, I know) and our television/cable. That felt really good. We now have an antenna and streaming service to cover our various viewing habits. (Note: we just watched a couple minutes of college basketball and, oh my, the clarity brought tears to my eyes. Also? Jim Boeheim somehow looks even more grumpy in high definition.)

We didn’t cut the internet service yet because we want to get everything in place with new email addresses first, plus I need to go through my 5000+ email inbox to delete and save accordingly. Oh, joy.

And even though I’m not looking forward to that task, I’m pleased we’re enough on top of things here at the ol’ homestead that we didn’t totally eff up that transition. Too bad I can’t say the same for cutting the cable cord. We just discovered that FX isn’t part of the streaming package we bought which means that I can’t finish watching the excellent BETTER THINGS starring Pamela Adlon (who co-created and writes it with Louis C.K.)

I was stupidly savoring the episodes rather than inhaling them in one sitting. And now I can’t finish the season. I’d classify that as very sad-bad news.

Wouldn’t you know the one time evil Comcast immediately responds to my request, it’s to disconnect my service?!

Good thing I’m not planning on getting sent to prison
because if it’s true that Orange Is the New Black,
I’m in serious fashion trouble;
I look great in black and pretty close to dead in orange.
(I appear equally deadish in tan/beige which is what the inmates on the
show wear after they’ve been fully processsed into the system.)

I’m several episodes into Season 4 and am enjoying it more than
Season 3 which I thought was awful in a lot of ways.
I’ve come to the conclusion that Piper is best as a seasoning,
rather than an entree.
Most every other character is more compelling.
In fact, I can’t think of one who isn’t.

Come to think of it, maybe that’s the point.

Either way, I’m going to watch the rest of the season
and be grateful I can choose what I wear each day.
Because not all of us wear our orange as well as these poppies. 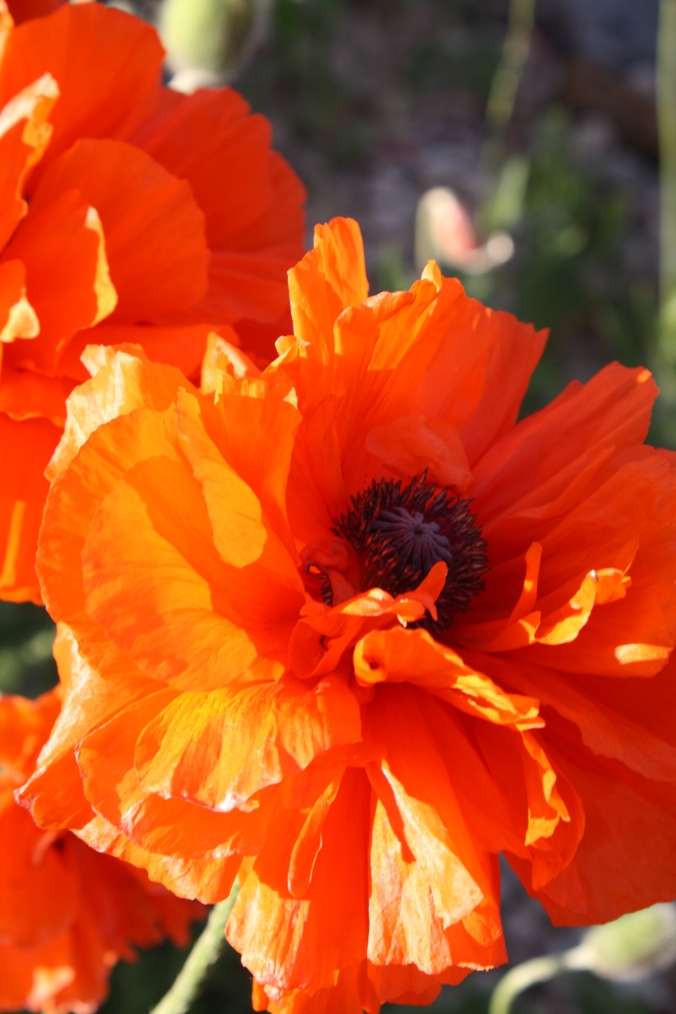 Happy poppies one day in May.