I grew up listening to The Band.
My parents had one of those huge cabinet stereos
that they’d hooked up to our intercom system
so music played throughout the house.

I washed dishes to The Band,
tanned outside on the deck,
lemon-oiled paneling and washed windows to their music.
I spent hours in my room, studying the album covers and liner notes
as I listened to the stories-in-songs they sang while trading verses and
marveled at the many instruments they played and the sounds they created.

These were the soundtracks for much of my childhood: 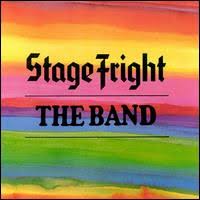 I knew their names and faces.
And I loved them even more when I found out they’d been
Bob Dylan’s back-up band before becoming The Band.
(Dylan painted the cover art for Music From Big Pink)

I spent my fourteenth birthday at home during a snowstorm
in Wisconsin while they played their very last concert together
in San Francisco. I was heartbroken I couldn’t be there with them
and their many friends: Bob Dylan (see#23), Joni Mitchell, The Staples,
Neil Young, EmmyLou Harris, etc.  But I’ve watched that concert
“rockumentary” (see #24), many times since.

In the spring of 1985, Rick Danko, Garth Hudson, and Richard Manuel
played a small club somewhere in the San Fernando Valley.
My friend, Scott E., and I went, lining up at the door well before the show
so we’d get good seats. We were front row. No Levon and no Robbie, but it
was still remarkable basking in the music and memories.

Levon was the drummer but he also sang some of their most famous songs.
The Night They Drove Old Dixie Down and Up On Cripple Creek. And not-so-
famous Ophelia. When I was pregnant, I made a mix tape of songs for my labor soundtrack. I wanted music so familiar to me I wouldn’t need to expend any energy on
thinking or processing the songs. I wanted to be able to sing every single word
without hesitation. The Weight was one such song.

But right now, as I mourn the passing of yet another member of The Band,
I offer you Levon singing All La Glory.

Thank you for all the beautiful music, Levon.
Wherever you are, I hope you’re still smiling and laying down the beat.