Last August, my 20-year-old son left for Uppsala, Sweden. He lived and studied there for two semesters. As I write this, he is flying back to Colorado. His study abroad adventure is nearly over. (The adventure continued up to the last minute: He and nine other passengers were caught in a long, passport line and arrived at their gate just after it closed, so Iceland Air stopped the plane  out on the runway and had a bus deliver Zebu and the other nine passengers to the plane.)

Zebu in Stockholm when we visited in May.

Over the past several months, Zebu has said that his study abroad experience has been the best year of his life. It didn’t start out so well.

When he arrived in Uppsala, he discovered that TSA had locked his suitcase. Half his belongings, including his raincoat, were inside. He paid a taxi driver way too much to drive him into the city and then spent an entire rainy day hauling the 50-pound suitcase around the cobblestones, trying to get it unlocked. Kind people in luggage stores tried different keys, with no success. Someone finally directed him to a shoe repair store where the man cut the locks off the suitcase. 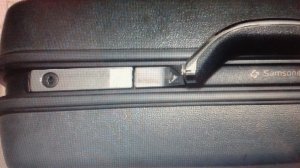 Zebu later confessed that that day, as he struggled with language barriers, a lack of wifi, hunger, and jet lag, he wanted nothing more than to turn around and fly back home.

Obviously, he’s very glad he stayed. And here he is in May, standing outside that shoe repair store.

I asked to see that store when we visited, because it felt symbolic. I was privy (via phone call and texts) to his frustration and panic as he couldn’t get his suitcase open, and tried to help from my end. He ended up finding his own solution. And ten months later, a confident young man is returning home after the best experience of his life.

For that, I am very grateful.