Last night while on my birthday adventure in Manitou Springs, Zippy and I discovered an old arcade with Skee Ball machines. I love me some Skee Ball. We each played two games (25 cents per game!), and rolled the nine balls. My first game, I only scored 130 points out of a possible 450. But the second game . . . 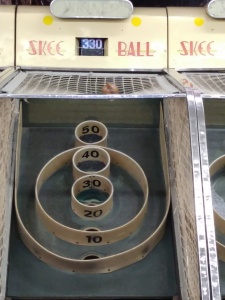 How do you think she does it? I don’t know!
What makes her so good?

I’ve decided that my perfectly-respectable-but-not-at-all-astounding score is a sign of good things to come. It’s a Skee Ball Omen.

(Note: That ball on top of the net is from another, less-wizardly Skee Baller.)