I’m getting ready to head out to one of my senator’s offices to urge his support for a Green New Deal. I had a conversation with one of his D.C. staffers yesterday when I called (again) to ask that he co-sponsor the Green New Deal. I was told Senator Bennet doesn’t support it because he wants legislation that’s bi-partisan so that whatever is passed won’t be subject to political winds depending on who is in power.

Classic establishment Dem thinking. Water down the policy in hopes the soulless ghouls across the aisle will approve. This senator also thinks he might run for president. *insert hysterical laughter* If Senator Bennet thinks he’ll get anywhere without the support of the young people out there fighting for their futures, he’s incredibly out of touch. Which is what I told that staffer.

Here are my signs for this afternoon’s meeting:

I don’t have high hopes for Senator Bennet who voted to approve the Keystone Pipeline and said at the time he thought Keystone should be part of a bigger solution to climate change. (?!) BUT, I can’t not make the effort when so much is at stake.

Please, even if you’ve already done so, put in calls today to your two senators and one representative to ask them to co-sponsor the resolution for a Green New Deal. We’ve gotta go bold before it’s too late.

Yesterday I spent four long and very cold hours in a library parking lot. I was there to educate people on Colorado’s Prop 112. I was hoping voters would support the proposition which would’ve created safer setbacks for fracking sites. I was hoping they’d agree that industrial oil & gas operations don’t belong nears schools and communities, and that public health and safety is paramount.

Some of the people I spoke with definitely cared. Some, however, didn’t think children’s health was at risk. My most gut-wrenching interaction in those four hours was with a young woman holding an exceedingly smiley and cute toddler. As I explained to her I was out there because of my concern for children’s well-being, she unzipped her son’s hoodie and showed me the shirt underneath. Someone in their household had dressed that small little boy with the beautiful smile in a NO ON PROP 112 shirt.

The oil & gas industry dumped millions of dollars into defeating Prop 112 and yesterday it succeeded. And today? Well, I just logged onto Twitter and saw this: 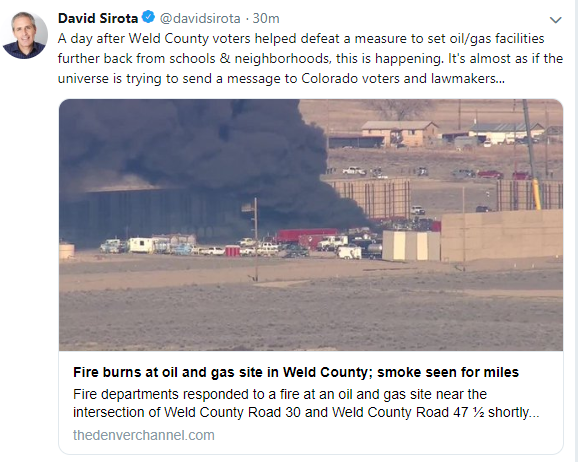 The site that is now on fire? It’s  owned by Noble Energy, one of the biggest contributors to the No on 112 campaign.

It’d almost be funny if the whole situation wasn’t so horrifying.

High-fives to all of you! 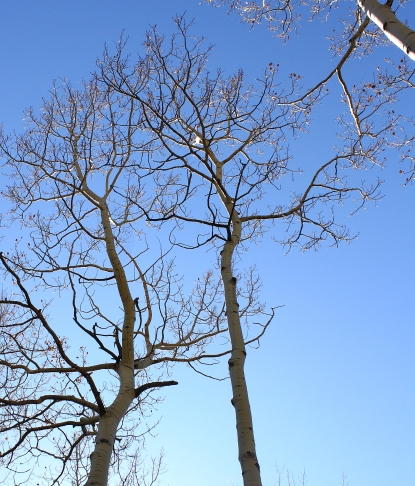 Farewell to this year
poetry all around us
must never forget

The only two things you can truly depend upon are gravity and greed.
~ Jack Palance