Zippy and I just returned from our weekly date. It was his turn to choose and he chose Guillermo del Toro’s THE SHAPE OF WATER. I would not recommend the film. However, Sally Hawkins’s performance was lovely and the movie was so visually pleasing that I debated whether to recommend watching it without sound. Alas, I believe the heavy-handed characterization and plot line would still sledgehammer their way into your consciousness even without audio.

As a writer, I’m kinda pissed. The characters were lazy stereotypes, including Michael Shannon’s character who was so  over-the-top I nearly burst out laughing. That character didn’t have one shred of decency. Not one. Plus, there wasn’t a whole lot of nuance in the film and absolutely zero question as to justice vs injustice. Zero question.

And you know that quote from Chekhov about the gun? (“One must never place a loaded rifle on the stage if it isn’t going to go off. It’s wrong to make promises you don’t mean to keep.”)  Yep, THE SHAPE OF WATER committed that sin when a hard-boiled egg didn’t go off. 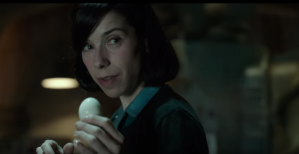