Wildebeest’s tail’s gone.
He wore it with pride for years
and now wants to share.

Wildebeest moved out almost exactly one year ago, but for the past week we’ve spent lots of time together. In the ER two nights and then the hospital after his appendix was removed. And back here at home after one post-op night in his apartment during which time he realized he needed more help due to the painkillers and nasty antibiotics.

Today he finally feels like himself again and he’s headed back to his apartment and beloved cat, Bernice. But first, he asked if I’d cut his hair. Even during his tumultuous teens we declared cease-fires over many a (bad) haircut, and today as I cut off his ponytail I said, “Thank you so much for doing this with me. Zebu won’t let me touch a hair on his head.”

Wildebeest said it was how he liked getting haircuts. I shook my head in amazement and fired up the clippers. We shared conversation and laughter while I did my amateur shearing and then I made the inevitable mistake: a divot above his right ear. I yelped in panic, but Wildebeest only laughed and said, “This is how it goes. There’s always a mess-up.” As I fussed and apologized, he said, “Don’t you remember, Mom? You always get like this by the end of a haircut. The panic is payback for the Susie Derkins cut you gave me in grade school.”

Ah, yes. The day I chopped his bangs waaaay too high on his forehead and he just laughed.

Wildebeest and I have had more than our share of clashes, but to his credit, he’s never, ever given me grief for any hair errors. He’s got a big heart, that boy. 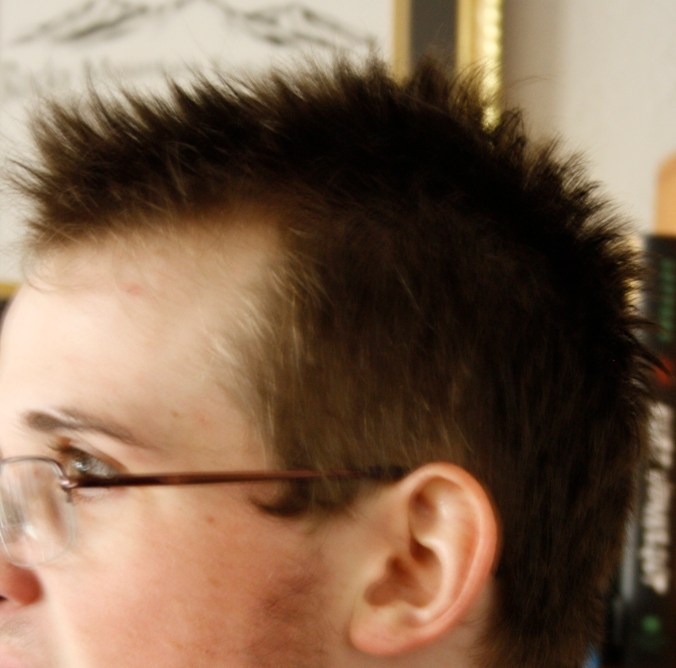