Welcome back to Climate Movement Monday in which I highlight frontline communities in need of support. The climate crisis is on full display this week with hurricanes and typhoon-related storms causing mass destruction. I’m listing local organizations that accept donations. Every bit helps, no amount too small.

WESTERN ALASKA was hit on Friday and Saturday by the remnants of Typhoon Merbock with hurricane-force winds that put coastal villages and towns underwater. 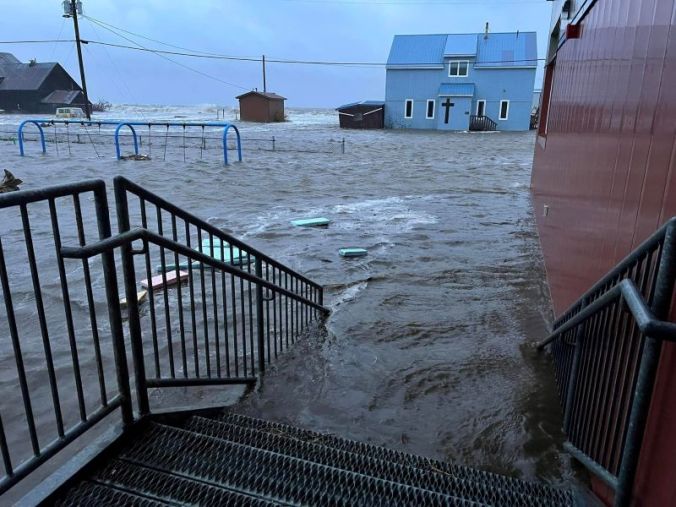 A massive storm battering Western Alaska brought floodwaters to the steps of the local school in Golovin on Saturday. (Courtesy Josephine Daniels)

PUERTO RICO which still hasn’t recovered from Hurricane Maria (exactly five years ago) is now flooded after Hurricane Fiona caused mudslides that knocked out the power grid. Much of the island has no power (it was privatized one year after Maria) and people are in desperate need of drinking water.

Also? PAKISTAN continues to suffer from flooding after torrential monsoon rains. The people are bearing the brunt of climate change and must receive climate reparations. “Pakistan, the world’s fifth most populous country, accounts for less than 1% of global carbon emissions but ranks as the eighth most vulnerable to climate change, according to the “Global Climate Risk Index 2021,” published by the nongovernmental organization Germanwatch.”

Okay, if you’ve read this far, I thank you! If you can donate a few dollars, I thank you again. As you can see, the climate crisis is here and certain vulnerable communities will suffer more than others. We need a just energy transition to an equitable world, and that means fossil fuels MUST remain in the ground.

What say you? Cancel reply